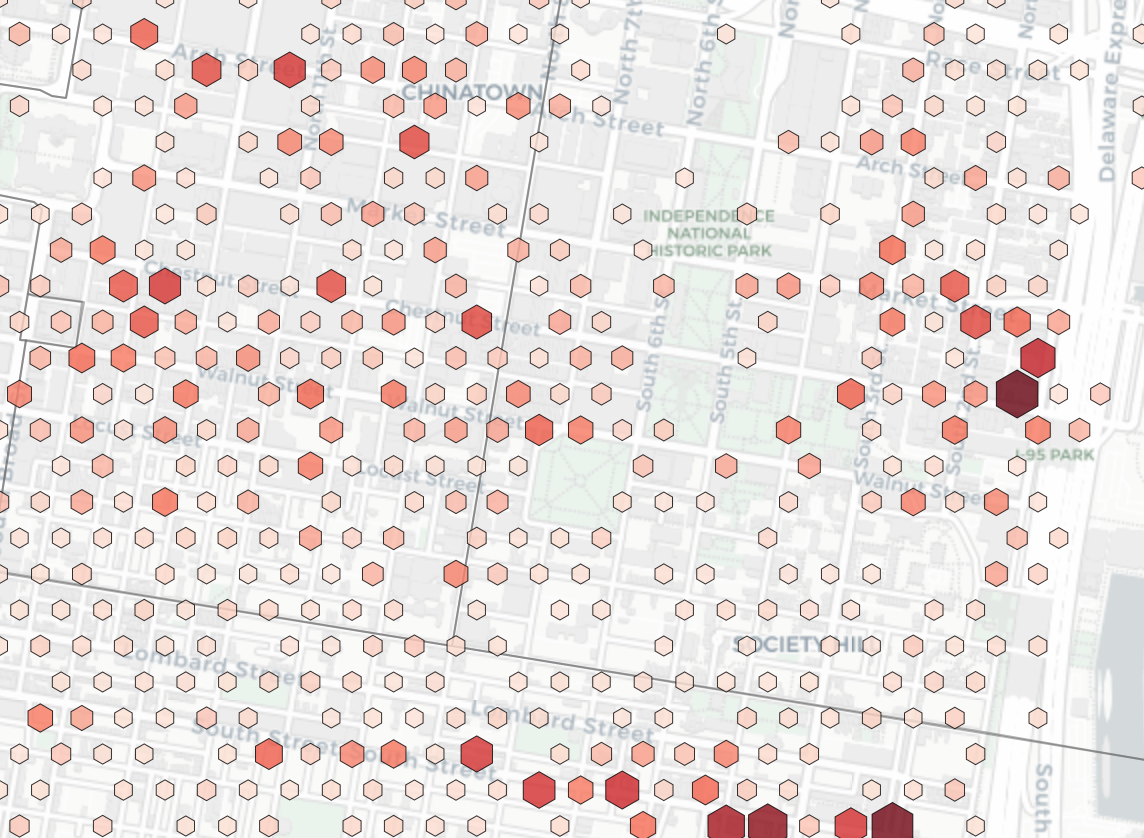 I recently moved back to Philadelphia after finishing my astrophysics PhD at Berkeley. To get reacquainted with my hometown, I began exploring the treasure trove of data that is OpenDataPhilly. With over 300 public datasets, there's a lot to dig in to. I started with the parking violation data, which ranges from 2012 to 2016. The data offered a good chance to learn some of the latest data viz tools. Namely, I took advantage of the open source javascript library dc.js, which neatly ties together the d3.js and crossfilter tools. Here, I'll discuss these tools as well as some of the trends that jumped out of the ticketing data.

The data visualization is up and running at http://nickhand.pythonanywhere.com, and the source code is hosted on my GitHub. Keep reading for the gritty details, or otherwise, happy exploring!

The data is available on Philly's open data website. In addition to hosting the data, the portal also links to several previous analyses and visualizations that have been done since the data was first published back in 2015. These include an analysis by philly.com, a series of maps by Tony Smith and Ken Steif, and a visualization by the city itself. These visualizations focus mainly on the entirety of the data, spanning several years, and are great for detecting seasonal and year-to-year trends. I wanted to dig into the data on a more granular level, so I decided to focus on monthly trends. This also helped limit the size of the data (and load times for users) and keep the interactive features running smoothly.

I downloaded the data in a CSV format and wrote a short Python script to pre-process and clean the data set. I needed to fix a few inconsistencies with the data; most importantly, the latitude/longitude coordinates for a portion of the data set seemed to be mislabeled and needed to be reversed. And since I was looking at the data on a month-by-month basis, I also needed to partition the data by month into separate files. This was all easily accomplished using the Pandas Python library. I ended up with 60 data files stored in JSON format, covering 2012 through 2016. Each data file stored the following attributes about each parking ticket issued during those years: latitude, longitude, timestamp, fine amount, zip code, day of week, hour, ticket description, issuing agency, and street location.

The app visualizes the parking ticket data in the following ways:

All of the above, except for the interactive map, can be achieved using the dc javascript library. It leverages d3 to produce reactive charts in the browser and supports crossfilter to allow users to easily filter and explore the data. Once you define the dimensions of the data, e.g., timestamp, zip code, day of week, etc., users can easily filter the charts along the dimension of their choosing.

I implemented the interactive map using the Leaflet javascript library. I first added the zip code boundaries of Philadelphia to the map using the GeoJSON data available from OpenDataPhilly. Next, I set up an interactive density map (using hexagonal binning) using a Leaflet plugin. The density map automatically shows the same data being plotted on the dc.js charts. As the user applies different filters to the charts, the density map updates simultaneously. We can go one step further to increase the interactivity of the map and charts. Since zip code is one of the data dimensions and the zip code boundaries are nicely delineated on the map, I added some javascript magic to the map that automatically applies zip code filtering of the data when the user clicks on specific zip codes on the map. This allows users to very easily visualize trends in the data for specific areas of Philly as they explore the map.

Putting it all together

Learning the javascript tools was the focus of the project, and since I'm an HTML + CSS novice, I opted to use the dashboard Bootstrap templates provided by Keen IO. This allowed me to get the app up and running quickly using an aesthetically pleasing and responsive design. And since I was already familiar with the Bootstrap framework, I was able to tweak things easily along the way. Finally, since I wanted to focus on monthly trends, I added a button to the dashboard to load the proper data given the month and year requested by the user.

Python is my language of choice, so I chose to deploy the visualization as a (very simple) Flask application. With just a few lines of code, the server was up and running, properly delivering the monthly data set requested by the user. Finally, I needed to host the app somewhere. The two obvious choices were Heroku and PythonAnywhere, and after a little research, I chose the latter. A few minutes of setup, and the app was up and running at http://nickhand.pythonanywhere.com.

The Philadelphia Parking Authority (PPA) is an infamous organization, known to operate with ruthless efficiency. That efficiency is reflected clearly in the data. There are over 100,000 tickets issued monthly, totaling a staggering 5 to 6 million dollars in fines. The bulk of those tickets are issued in Center City and its surrounding zip codes Monday through Friday, when the frantic search for a valid parking space must often competes with other time constraints, such as getting to work on time. Lunch time hours (11 AM to 2 PM) appear to be the peak time to get a ticket in these areas. Sundays are the easiest day to avoid being ticketed. The ticketing distributions for Thursday, Friday, and Saturday are bimodal, with the usual lunch time peak followed by a second, lesser peak around 9 PM, which likely takes advantage of the weekend nightlife ramping up across the city.

There are clear ticketing trends present in the data, and the PPA have very likely optimized their enforcement patterns and hours to issue the most number of tickets possible. That is likely why we see ticketing peaks at lunch time during the work week and in the evenings during the weekend. However, to draw further conclusions from these patterns, we would need to perform a more careful statistical analysis. A complex number of variables, such as population, traffic flow, number of registered cars, etc., contributes to these trends, and they would need to be carefully accounted for.

The data visualization is particularly well-suited for detecting anomalies in the data. These outliers are due to city-wide events that impact the usual ticketing patterns in a meaningful way, and identifying them in the data allows you to reverse engineer their cause. For example, there is a clear deficit in the number of tickets issued from January 24 - 26, 2016, with a rise in the number of snow emergency tickets. The cause was Winter Storm Jonas, which dropped over 20 inches of snow on Philadelphia. An even more striking outlier occurred from September 24 - 29, 2015, with nearly no tickets being issued during that time. These dates correspond to the Pope's visit to Philly. With the ticketing machine shutdown for roughly 5 days, the total amount issued in fines was about 1 million dollars below average in September 2015.

And with that, I'll leave you to explore the data. Good luck avoiding those parking tickets, and thanks for reading!